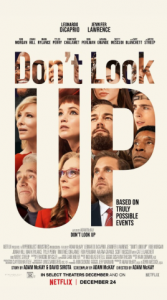 Methinks the critics doth protest too much when it comes to their ill-conceived complaints about this brilliant satire from director Adam McKay, primarily because the filmmaker hits far too close to home for the self-absorbed, supercilious elite in business, politics, and, especially, the media, the institution charged with reviewing material like this. This bitingly cynical yet consistently hilarious dark comedy about the responses of various corners of officialdom to the impending impact of a planet-killing comet poignantly illustrates the wrong-headed priority that contemporary authorities place on self-serving expediency rather than genuine leadership in the face of certain doom. As a metaphor for the current state of American culture, the film is undeniably more than a little over the top, but, given the nature of the message, it also couldn’t have been anything less in order to make its point, especially to a society that has become increasingly ignorant and complacent to pay attention to what’s really going on around it. The stellar cast is superb across the board, playing their parts near perfectly for each and every character. But what’s most impressive is how genuinely funny this offering is throughout, never succumbing to lulls, pacing issues or jokes that fail to land, something few comedies can successfully pull off these days. Indeed, in a year that has been characterized by a wealth of lame releases that have been undeservedly touted for their alleged brilliance, it’s truly refreshing to see one that finally lives up to such qualities – even if many of those writing about it can’t see that for themselves, about which all I can say is, “I rest my case.”