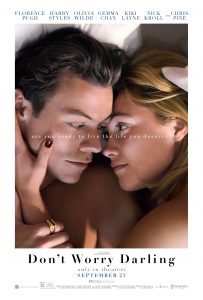 Well, I’ll say this much for this one – I’m glad I didn’t pay theater ticket prices for it. Director Olivia Wilde, who made such an impressive feature debut with the high school buddy comedy “Booksmart” (2019), has definitely stumbled with her sophomore (or is it sophomoric?) outing. This mishmash of science fiction, social commentary and mystery/fantasy is too long, too unfocused, and, at times, more than a little too obvious in its message and metaphors. In this heavy-handed portrayal of 1950s idealized American life, it quickly becomes apparent that many aspects of it are a little too on the nose while simultaneously incorporating obvious anachronisms, immediately tipping off viewers to the fact that this is not a real place nor an authentic historical re-creation. That back-handed revelation seems to be somewhat casually glossed over, however, as the picture continues to try convincing the audience otherwise with only occasional references to the contrary, a practice that needlessly stretches out the story and becomes rather repetitive in the process. A number of elements seem to be included for sheer cinematic indulgence, too, such as an inordinate number of inexplicable sequences that look like an homage to the June Taylor Dancers. To its credit, this offering does have its share of strengths, such as its superb art direction and production design, gorgeous cinematography, terrific soundtrack, and capable performances by Florence Pugh and by the director in a supporting role. Nevertheless, there’s too much redundancy and extraneous material left in here, something that I sense is more attributable to the screenplay than to the director’s efforts. Wilde is a more adept filmmaker than what is apparent here, and that would seem to be more the fault of the script than the person behind the camera. Also, there are ample aspects that appear to be “derived” from other films, including “The Stepford Wives” (1975), “Ex Machina” (2014), “Minority Report” (2002) and “The Matrix” franchise. I’m not sure who’s responsible for so much egregious “borrowing,” but it, too, becomes obvious and annoying after a while, prompting one to ask, “What movie am I actually watching here anyway?” Unfortunately, there’s truly enough wrong with this release to recommend it, so I’d heartily suggest taking a look at “Booksmart” instead to see what this director is genuinely capable of.