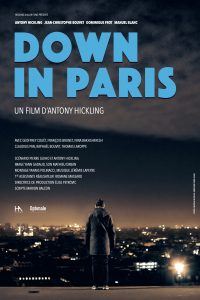 Finding ourselves is something we all must do, including members of the LGBTQ+ community, who must ultimately discover themselves in areas of their lives that encompass more than their sexual orientation. Such is the case in writer-actor-director Antony Hickling’s introspective character study about a frustrated filmmaker who walks off the set of his latest picture and spends the night wandering the streets of Paris. During this colorful and sometimes-surreal odyssey, he engages in a series of planned and chance encounters with an array of others, including friends, a former partner, a Tarot card reader and a host of strangers, all of whom nudge the protagonist into taking an honest look at himself, his life, his past and his future, a revelatory and rejuvenating experience in many regards. I applaud this release for taking a wider view of life in which a gay lead character focuses his energies on addressing issues other than his orientation and lifestyle. While the pacing lags a bit in a few sequences, the film does an otherwise-fine job of keeping the narrative moving and engaging without lapsing into dry, protracted talky scenes that weigh down the work. An impressive offering that does much to expand the scope and perspective of what constitutes gay cinema. Sensitive viewers should be aware the picture contains some sexually explicit content.