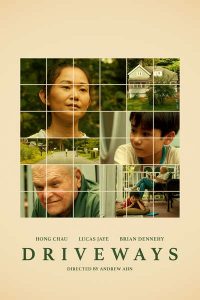 A gentle, touching story about a lonely 8-year-old boy and his single mother who travel out of town to empty the house of a recently deceased relative and end up befriending their late relation’s next-door neighbor, a widowed 80-something Korean War vet. This moving tale exudes warmth as the three lonesome protagonists grow close to one another, filling a huge void in each others’ lives. However, director Andrew Ahn’s latest is far from an exercise in schmaltz or obvious manipulation. Though some of the picture’s themes are familiar, they’re often handled in unconventional ways and always addressed with deft skill and subtlety. There are a few elements that could have used a little further development, and the ending – though effective – seems to come somewhat suddenly. However, these shortcomings aside, “Driveways” is a genuine pleasure, especially for its performances (most notably that of Brian Dennehy in one of his last roles). It’s a fine offering worthy of its two 2019 Independent Spirit Award nominations, now available on cable TV and streaming online.