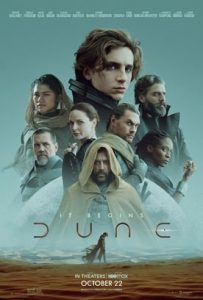 In creating a film epic, there has to be something “epic” about it in order to qualify for that designation. Unfortunately, this latest remake of Frank Herbert’s “Dune” fails on that point on so many fronts. While the special effects and cinematography are indeed dazzling and the film can justifiably lay claim to yet another outstanding Hans Zimmer score, there’s not much else here to grab viewer attention or evoke an emotional response. A big part of that has to do with the film’s overlong, unengaging narrative, much of which is a cold, boring, confusing, protracted snooze and often tediously derivative in its vision, not to mention inherently and obviously incomplete. There are also casting issues aplenty, with some performers, like Timothée Chalamet and Rebecca Ferguson, being placed into roles for which they’re wholly unsuited, and with others, such as Josh Brolin, Javier Bardem and Charlotte Rampling, being woefully underused. This is an uncharacteristically underwhelming effort from director Denis Villeneuve, a filmmaker best known for stellar work on pictures like “Arrival” (2016) and “Blade Runner 2049” (2017). Regrettably, this is yet another example of a much-anticipated offering that falls flat and comes nowhere close to living up to its potential.