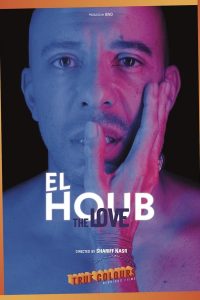 What happens when enough is enough? For a closeted gay Moroccan man living in Amsterdam, spending his life constantly looking over his shoulder and dodging questions about marriage from his family and community have truly tried his patience. And, when his father accidently discovers him with his Ghanaian boyfriend, the incident sets off a firestorm with his parents and younger brother. But it also represents an opportunity to finally get things out in the open once and for all, a process where he symbolically locks himself in a closet in his family home and refuses to leave until the matter is resolved. Events unfold along thematic lines during the lockdown, told through tense conversations and augmented with flashbacks, surrealistic sequences and interactions with the protagonist’s younger self, encounters that benefit both the elder self and his 10-year-old counterpart. This inventive storytelling approach unearths revelations that apply not only to the beleaguered son, but also to his other family members and his loving partner, who sets a courageous example by severing relations with his relatives when those relationships no longer work. Writer-director Shariff Nasr’s debut narrative feature makes an impressive, albeit controversial, statement about knowing when to hold on and when to let go to tradition, culture and even ties to kindreds where those toxic bonds no longer serve us, regardless of the cause behind such dissolutions, but especially among those forced to endure intolerable conditions related to one’s sexuality and lifestyle. The sequence of events may come across as somewhat meandering at times, but, given the confusion and frustration in play here, who’s to say that one could remain completely rational when undergoing such as analysis. Any deficiencies in this are skillfully concealed by the picture’s excellent cinematography and production design, as well as the superb performances of its fine ensemble cast. “El Houb” represents a noteworthy start for a filmmaker who obviously has much to offer, a career that I can’t wait to see develop and unfold.