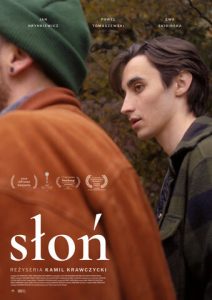 Is it possible to establish a loving, open, intimate same-sex relationship in an atmosphere of intolerance? That’s the question raised in writer-director Kamil Krawczycki’s second feature about an emerging gay male partnership in a rural, ultra-conservative, brazenly homophobic region of Poland, a story courageously filmed on-site. The picture follows the story of a smalltime horse farmer and reluctant caregiver to his unappreciative, closed-minded mother who begins falling for a long-absent musician who returns home for his father’s funeral. But, when the duo starts hanging out together on a regular basis, they raise eyebrows, especially given the prodigal son’s reputation and the reasons for why he left years ago. As their bond strengthens, the couple faces some hard choices about their future – particularly where it will unfold. This gorgeously filmed, sensitively acted tale admittedly follows a rather prototypical narrative and experiences some occasional pacing issues, but, given how skillfully this production is executed, there’s much to be said for the picture’s overall quality. It’s the kind of saga that will undoubtedly stir the ire of some of the most prejudiced viewers – and deservedly so.