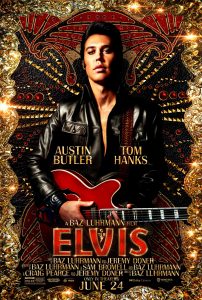 Given how many portrayals have been made about Elvis Presley over the years, I had to wonder how much we really needed yet another one. However, director Baz Luhrmann’s latest is a solid, reverential, if a bit uneven, offering about the King of Rock ʼn Roll. True to the filmmaker’s characteristic glitzy, high-gloss cinematic style, “Elvis” is decidedly cut from the same cloth as earlier works like “Strictly Ballroom” (1992) and the remake of “The Great Gatsby” (2013), featuring stunning (if at times somewhat overdone) visuals and production values. Admittedly, the film safely covers mostly familiar ground about Presley’s life and career, presenting few revelations or new insights into the music icon. Yet it also places greater emphasis on certain elements compared to other depictions, such as his largely overlooked concerns about social justice issues and his efforts to create wider awareness of African-American music and artists. It also delves more deeply into his relationship with dubious manager Colonel Tom Parker (a somewhat miscast Tom Hanks), whose story is given nearly equal treatment to that of the protagonist. But the balance between these dual plot threads isn’t always balanced as well as it might have been. Also, some aspects of Presley’s life are given noticeably short shrift, such as his loving but often-stormy marriage to wife Priscilla and his struggles with substance abuse. Nevertheless, for a film with a 2:40:00 runtime, it’s remarkably well paced (save for a little sagging in the middle) and never loses viewer attention, thanks in large part to its energetic and vivid visuals. The real standout here, though, is the fine breakout, award-worthy performance of Austin Butler in the lead role, who imbues his take on the character with respectful credibility and successfully avoids making this well-known persona look like a caricature of himself, something that would be easy to do in lesser hands. In short, this release may not be the silver screen epic it aspires to be, but it’s a fine way to spend a weekend afternoon at the theater, one that’s certainly better than much of what this year’s summer movie season has produced thus far.