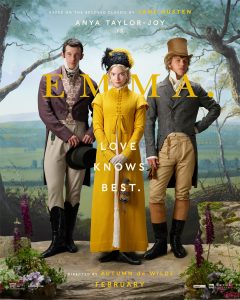 Unless you’re a diehard fan of the period piece comedy of manners genre, you’ll probably find this latest cinematic version of Jane Austen’s classic novel about a self-absorbed genteel woman who fancies herself a matchmaker to be one of the most tedious and unengaging films you’ll ever watch. While the production is meticulously assembled in its costume design, art direction and cinematography, with a fine lead performance by Anya Taylor-Joy, the picture is otherwise emotionally flat and astoundingly boring, one that will challenge the patience of even the most tolerant moviegoers. The wit and humor that make this work succeed is virtually nonexistent here, with a bevy of well-dressed characters prattling on and on about relationships involving people most viewers are likely to care nothing about. Given the many versions of this story that have been made over the years, and in light of the substandard quality of this one, perhaps it’s time to give “Emma” a well-deserved rest for a while.