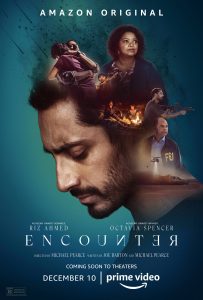 One of the keys to making a successful thriller is the ability to sustain the suspense long enough to hold viewer interest. That’s especially true in a sci-fi context, where maintaining the level of mystery and intrigue can definitely create an engrossing edge-of-the-seat quality. However, this requires a delicate degree of balance; dragging on matters too long can try the audience’s patience, while playing one’s hand too soon can shortchange those who paid good money to see an engaging cinematic experience. Regrettably, director Michael Pearce’s second feature succumbs to the latter, leading to a protracted (and sometimes over-the-top) end run in which much of the deliberate ambiguity that makes the picture’s opening sequence interesting is prematurely dispelled. The film thus arrives at its big reveal at a point where a little more narrative tease is called for (and would have made for a much better picture). Riz Ahmed delivers yet another fine lead performance, backed by the fine supporting work of two young actors, Lucian-River Chauhan and Aditya Geddada, along with some excellent (though occasionally derivative) camera work. Unfortunately, that’s not enough to save this vehicle from itself. Indeed, the temptation to shoot the works may be exhilarating, but sometimes (as here) a little restrained patience can go a long way to telling a better and much more compelling story.