‘Everything Everywhere All at Once’ 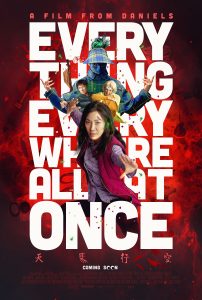 “Everything Everywhere All at Once”

How well do “you” know the version of yourself (sometimes called “the localized you”) with which the majority of us are most familiar? Chances are most of us aren’t even aware of any of our other selves, but those well versed in metaphysical circles have a good sense about our innate multidimensionality, and making audiences aware of this phenomenon is what this manic comedy-drama is all about. When the beleaguered owner of a laundromat is beset by issues with her husband, father, daughter and the IRS, it seems, like the title implies, that everything hits all at once. But that’s nothing compared to what happens when she’s unexpectedly contacted by a different version of her spouse who informs her that he’s been looking for her for a long time to help resolve an issue with a growing evil in the multiverse, a task with which she’s supposedly best suited to address but completely unfamiliar. However, as her awareness grows, this new adventure begins opening doors for her in unexpected ways, not only in the universe in which she dwells, but also those in which other versions of herself reside. The result is an insightful and hilarious exploration of some heady philosophical and moral concepts, punctuated by stunningly clever visual effects, huge laughs, uproarious send-ups of a variety of other films, and dynamite performances by Michelle Yeoh and Jamie Lee Curtis. Nevertheless, despite these assets, the film goes on far too long, telling a story that could have easily been trimmed by about a half-hour, primarily by eliminating some bits that overstay their welcome (such as take-offs of martial arts movies that start out funny but grow tiresome after a few too many run-throughs). This offering from directors Dan Kwan and Daniel Scheinert is certainly an ambitious and inventive release, but it’s unfortunate that the filmmakers didn’t know when to stop. It’s indeed worth a look, but it’s regrettable that those responsible for the picture didn’t have the wherewithal to “kill their darlings” and quit while they were ahead.