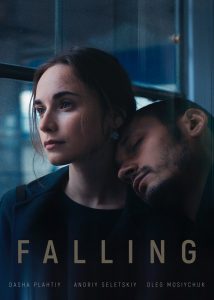 In a nation long beset by challenges including authoritarian Soviet rule, the Chernobyl disaster, the 2014 Maidan Revolution and now the war with Russia, Ukraine is a nation that has endured much as it has struggled to find a new identity for itself, especially among the younger segment of its population. The lingering ghosts of a troubled past and a future full of uncertainty have left many feeling lost, despondent and directionless, creating for an often-bleak outlook. As true as it is today, that was very much the case in 2015, a year after the Revolution at a time when the winds of the now-wider war began to blow, leaving many of Ukraine’s youth up in the air about their country’s and their own fate, as depicted in director Marina Stepanska’s 2017 debut narrative feature, now available for streaming online. In this unconventional love story/character study, the film follows the fortunes of a prodigy composer wrestling with addiction, creativity and self-esteem issues and an unfocused young Kyiv woman who’s vacillating about moving to Berlin with her German boyfriend. When the two strangers meet in a chance encounter, a connection is forged as they each strive to find themselves under the prevailing murky conditions pervading their society. Torn between giving up and getting back up after each time they “fall,” they slowly enter into an uneasy but undeniable romance, one that manages to provide in-the-moment flashes of happiness that they tentatively struggle to savor, no matter how fleeting and transitory they may be. It’s thus a story that preponderantly waxes bittersweet, often characterized by despair and listlessness but yet not without its meager though nevertheless sincere hope for better times. Admittedly, the narrative builds slowly (sometimes a little too much so), jealously holding on to its secrets and revealing them in carefully measured doses, but this approach manages to create a sense of anticipation that’s genuinely rewarded when the characters’ truths at last surface. This offering likely won’t appeal to everyone, but, for those who are sufficiently patient to wait for their payoffs, this release comes through on many levels, leaving viewers with much to contemplate in the wake of this engaging cinematic experience.