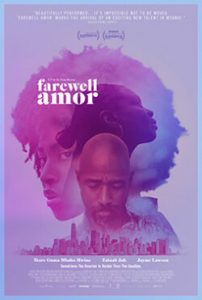 This simple tale of an Angolan immigrant family reunited after 17 years apart tells the story of how they seek to pick up the pieces and move on. Director Ekwa Msangi’s debut theatrical narrative feature is told in three segments, one each from the perspectives of the three principal characters (father, mother and teenage daughter). Each segment includes details of their collective story that don’t appear in preceding or following chapters, thus allowing the overall narrative to be pieced together like a puzzle. By presenting the story in this way, viewers witness the bigger picture gradually come into view in much the same way that the protagonists do, a refreshingly revelatory storytelling experience. Admittedly, some of the material is somewhat predictable and more than a little bit sentimental, but these drawbacks are compensated for by fine performances, touching writing and a pervasive warmth, all aimed at shining a bright light on the experience of what it’s like to live under circumstances such as these. It’s an important message in a time like this, with so many from so many places living under similar conditions. In doing so, the picture illuminates the connections, challenges, hardships and reconciliations that those living out the immigrant experience go through and share with one another, no matter what their points of origin, ports of entry or hopes for the future may be.