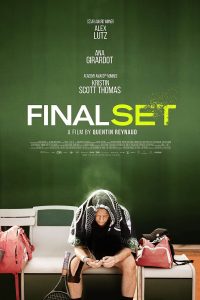 It’s easy for sports movies to fall into the trap of being corny, clichéd and trite. However, director Quentin Reynaud’s second feature takes the genre a step further, serving up an engaging, thoughtful character study about an aging French tennis star (and onetime prodigy) seeking to finally live up to his potential before his failing physical condition forces him into retirement. In doing so, however, he must not only deal with those ailments, but also face the psychological demons that have dogged him throughout his career. While some elements of the story are a little repetitive and occasionally predictable, the film nevertheless offers viewers a fresh take on issues like drive, obsession and the price we’re willing to pay to realize a cherished goal, no matter what the milieu. The picture’s fine performances, ethereal score and artfully filmed tennis matches mix well, adding to a narrative that seeks to go beyond the expected and ordinary. “Final Set” definitely delivers more than what one might anticipate, advancing a genre that all too often takes the easy route, and one can hardly find fault with that.