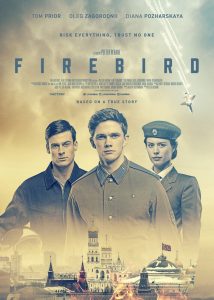 What begins as a prototypical forbidden gay romance – the kind that has been done many, many times before – successfully manages to redeem itself by embedding its story in a larger context. Director Peeter Rebane’s debut feature tells the story of a Soviet air force pilot and a private assigned as his aide who fall in love during the Cold War and subsequently become caught up in a complex love triangle with a female colleague, all the while under the intrusive scrutiny of the KGB. The handling of the fact-based narrative is admittedly somewhat melodramatic and formulaic, but the film’s heart is decidedly in the right place, evoking genuine audience sentiments. What’s more, the picture effectively places the primary story thread in a historical and social context in which elements other than the romance play integral roles, particularly in terms of how they affect the unfolding of amorous developments. The result is an engaging offering, one that’s highly affecting emotionally and poignantly draws attention to the plight of a persecuted minority discriminated against by an intolerant authoritarian regime, one whose past prejudicial tactics still echo to this day.