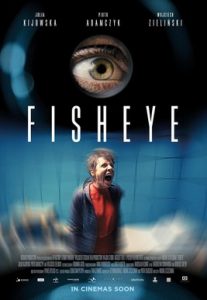 When a brilliant research oncologist makes a huge breakthrough, she mysteriously disappears. Is someone out to steal her work? Or is something else afoot? As it turns out, she’s abducted and secluded in sound-proofed space immediately adjacent to her own apartment, but no one knows she’s there. During this captivity, she’s able to see and overhear developments in the lives of her nearest and dearest, as well as revelations about herself, clues that offer insights into some of her own unexplained past behavior. But can she earn her freedom? And, if so, how? That’s the puzzle in director Michal Szczesniak’s debut feature, a psychological thriller that intriguingly operates on multiple levels. However, as engaging as this premise is, the picture begins to run out of story about two-thirds of the way through. It’s obvious the film is moving toward some sort of conclusion, but it becomes bogged down in tangents and padding that are likely to prompt viewers to demand “Get on with it already!” The makings of a great movie are here, especially in the lead performance of Julia Kijowska, but some much-needed shoring up is required to reach that goal.