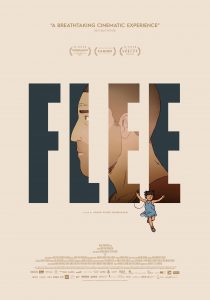 This will undoubtedly be perceived as an unfavorable opinion, but I’ll say it anyway – the gay protagonist’s harrowing story about his escape from Afghanistan’s political turmoil is truly inspiring, and the animation used to tell it is visually dazzling. But do the two really mesh? I must be missing something here, because, even though director Jonas Poher Rasmussen’s latest is inventive in its own right, I fail to grasp the significance of using this particular approach to tell this story. In fact, I’m even skeptical about labeling this work as a documentary; it seems more like a stylish retelling of a true story, which, in my book, isn’t the same as a work belonging in the genre in which it has been placed. It also underplays the gay aspect of this story in favor of a somewhat overlong recounting of the protagonist’s flight to freedom. While the film certainly has its admirable elements (especially in the last half hour), this offering strikes me as yet another overhyped 2021 release – not as much as many of last year’s other cinematic darlings, but I don’t see this as something deserving of the excessive praise that has been so generously heaped upon it.