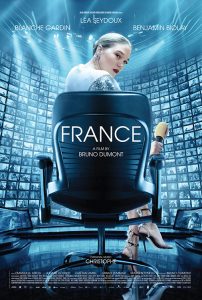 If ever there were a film that embodies the notion of “Life sucks and then you die,” this would be it. Writer-director Bruno Dumont’s latest, a depressing cynical comedy-drama, takes the concept of weltschmerz to an entirely new level. That includes not only the content of the film’s narrative, but also the agony that’s inflicted upon audiences viewing this tediously slow, meandering, unfocused slog. Told from the perspective of an immensely popular French TV journalist who has everything that everyone supposedly wants – fame, fortune, wealth, beauty – the film follows her triumphs and tragedies, all of which leave her feeling eminently empty and depressed. Some of it is personal, some professional, and nearly always in matters of integrity, meaning and fulfillment, conditions that leave life affording us precious few joys. In some ways, the film could also be seen as a metaphor for the current state of society, most notably that of France (the nation) as reflected through the experiences of France de Meurs (the protagonist). Ultimately, the foregoing may be all well and good in theory, but it’s sorely lacking where the execution of this production is concerned. Dumont truly seems to be striving for something here, but it ends up feeling more like “reaching” in the end. This overlong, often-vague, frequently repetitive, generally lost cinematic exercise truly is one well worth skipping.