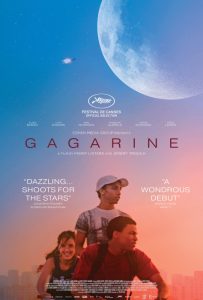 When a rundown housing project on the outskirts of Paris is slated for demolition, its predominantly low-income immigrant residents face forced eviction and relocation. But one occupant resists. As an aspiring astronaut, 16-year-old Youri tries to save the complex of high-rises named in honor of Russian cosmonaut Yuri Gagarin, the first man in space and the youngster’s namesake. But, when the clock runs out, he must scramble to survive as the project’s only remaining resident. It’s at this point, though, when the picture loses its way, turning somewhat preposterous. And, the longer it goes on, the more the film turns surreally preposterous, mixing fantasy and reality in a fuzzy, disjointed way, leaving viewers wondering how the two actually mesh. The result is an unsatisfying disappointment, almost as if directors Fanny Liatard and Jérémy Trouilh ultimately didn’t know where to take their debut feature. That’s regrettable, given that their production seemed to start off with a promising premise that lost its legs part way through. It’s commendable to dream for the stars, but you have to have a flight plan in place before you launch, something that’s sorely lacking here.