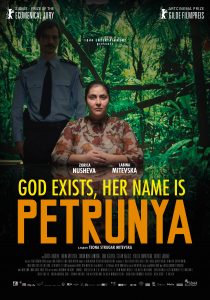 Taking on an entrenched, centuries-old social, religious and political patriarchy is no easy feat, but the protagonist in director Teona Strugar Mitevska’s latest offering unwittingly does just that. Set in the small Macedonian community of Štip, a discouraged, unemployed, single, plus-sized, thirty-something spinster who still lives with her parents becomes the unlikely center of attention when she impulsively participates in and wins a local, traditionally male-only, religiously inspired sports competition, inciting claims of impropriety, invoking civil unrest and theft of a sacred icon (with no legal basis for backing up any of the charges, despite inflated vague allegations that she broke “the rules”). While the film crackles with biting satire and delivers an important and empowering feminist message, it tends to get bogged down in repetitive, circular arguments at times, making the picture come across as heavy-handed and dogmatic (at least to those of us who reside in more tolerant and open-minded societies). But, then, for a culture that has long fought against progressive social change, perhaps such a sledgehammer approach is what’s needed to get the message across to those who have staunchly resisted it and used whatever means available to them to reinforce such an archaic view against women. To many, it might seem that films like this should no longer be necessary in this day and age, but the fact that it was made suggests the opposite and that there’s yet more work to be done.