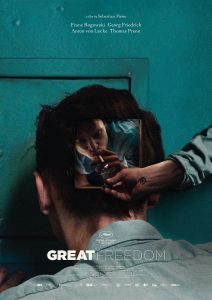 Life was once quite different for the LGBTQ+ community years ago. The mere act of engaging in same-sex relations was a criminal offense in many now-progressive countries, an activity punishable by branding offenders as perverts and landing them in prison for extended periods. One of those countries was West Germany, whose draconian measures even went so far as to transfer homosexuals liberated from concentration camp incarceration to state imprisonment after World War II. The harsh, prejudicial treatment experienced by West German gay men between 1945 and 1969, when the nation’s laws against homosexual conduct were finally abandoned, provides the basis for this prison drama/love story told in four segments about the lives of four inmates, three of them gay and one of them more than a little curious. Director Sebastian Meise’s second narrative feature presents an unflinching look at what gay men were up against during the time, when the simple act of loving someone of the same sex could have dire consequences, especially for the outspoken who believed one’s love life was none of the state’s business. Despite some occasional pacing issues (undoubtedly deliberate though at times frustrating in its attempt at conveying the tedium of prison life), this engaging and heartfelt drama makes its case without being preachy or heavy-handed and features fine performances by Franz Rogowski, Georg Friedrich, Thomas Prenn and Anton von Lucke, along with some inventive camera work. It’s indeed heartening to see how far we’ve come in the years since then, but “Great Freedom” reminds us of how far we’ve had to journey in getting there – and how there are those in this world who are still subjected to this kind of needless abuse.