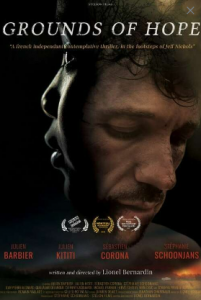 When a former smalltime boxer (Julien Barbier) down on his luck and seeking to recover from a past tragedy strives to make a new start, he quickly finds himself compromised by new challenges that force him into some hard choices. In an effort to raise money for medical treatment for his ill father, compensate for potentially looming unemployment as a cement mason and help his sister (Stéphanie Schoonjans) in her plans to shelter a pair of illegal African immigrants, he reluctantly makes a deal with a smart-mouthed local mobster (Sebastien Corona) to partake in fixed fights that promise lucrative payoffs for his “cooperation.” But, when events don’t pan out as hoped for, he’s backed into a corner that calls for him to fight back in ways he hadn’t planned. While director Lionel Bernardin’s debut feature has its moments of eloquence, a fine performance by Barbier, and some fine camera work and film editing, much of the picture ends up being rather trite, especially in its comical, almost-cartoonish portrayal of the bad guy and his band of minions. In addition, the film’s attempts at providing a back story for the protagonist are underdeveloped, leaving viewers wondering exactly how he fell into the downward spiral from which he’s now trying to escape. “Grounds of Hope” appears to have a strong enough foundation for the makings of a solid film, but it feels like the script needed to go through a few more rounds of revisions to get the finished product right. It’s certainly no knock-out but, rather, more of a TKO by split decision.