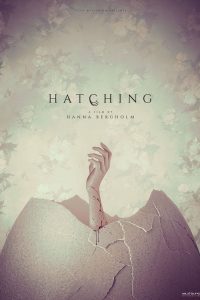 The price of perfection can be a pretty high one, especially when demands are placed on those ill-equipped to deal with it, such as the young among us. That’s the challenge faced by a teenage gymnast who’s being politely but relentlessly prodded to perform by her perfectionist mother, a control freak who gracefully struts around in designer pastels. But circumstances change when the ambivalent athlete comes across a mysterious egg that, in a gesture of contrition and empathy for an error in judgment, she decides to care for and hatch to maturity. It’s a venture that unleashes an unusual creature and sets her off on a strange personal odyssey, one that brings her face to face with herself, the conditions under which she trains for competition and an array of weird family dynamics. Director Hanna Bergholm’s debut feature serves up a wild and wacky yarn that fuses elements of macabre fairy tales and dark humor, tinged with Martha Stewart aesthetics and lots of guilty pleasure chuckles that may make viewers feel uneasy when the laughs surface. The film admittedly feels a little stretched out in the end run, and there are times when the narrative’s intents aren’t delineated as clearly as they might have been. But, for those who enjoy the guilty pleasures of a funny and campy horror flick, this offering makes a good screening option.