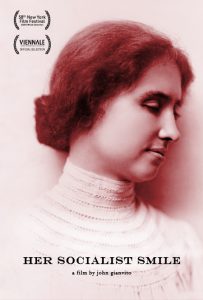 Sometimes you think you know someone and later find out that he/she turns out to be something totally different. So it is to a surprising degree with Helen Keller, the renowned blind and deaf author and lecturer who is perhaps best known for her work as an ardent advocate for those with disabilities. However, as director John Gianvito’s new documentary about the iconic figure reveals, Keller was also a radical socialist, one who unabashedly lambasted the capitalist-militarist system and zealously fought for the rights of women, laborers, minorities and the impoverished. She championed the Russian Revolution and was a member of the International Workers of the World, actions that eventually brought her under surveillance by the FBI. This is not to suggest that she was unpatriotic, but she strongly felt that the American system was broken in many ways and needed to be significantly reformed to bring about fairness, justice and equality. Years later, however, when she saw how socialist ideals had been corrupted by parties like the Soviets, she backtracked somewhat, not from a theoretical standpoint but definitely from a practical one, a move that probably contributed to the downplaying of her prior views and her reputation as an activist social reformer. The film does a fine job in bringing all this to light, and its singularly distinctive approach makes this one of the most stylish documentaries to be released in some time. However, I can’t say I agree with some of the filmmaker’s stylistic choices, such as the use of lengthy quotes presented as on-screen graphics requiring considerable viewer reading – enough to try the patience of even those who generally feel comfortable reading subtitles. There is also some inconsistent treatment in the presentation of the material, keeping the film from striking a consistent tone and rhythm. In the end, “Her Socialist Smile” may prove eye-opening in many ways, and the path chosen for delivering those revelations may indeed be a distinctive one, but the overall production feels somewhat off-kilter as a piece of filmmaking, one whose noble attempts at doing something different don’t quite click as well as they could have.