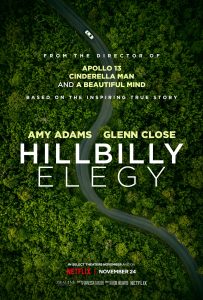 It may have its flaws, but this domestic drama with a twist is far from the cinematic debacle that most reviewers have labeled it, making me wonder what film they watched and/or what agenda they may have. This story of a family with Appalachian roots with a history of crises has been unfairly called boring (far from it) and clichéd (something that’s hard to imagine, given that it’s based on a fact-based memoir), attributes that, because of issues with its writing and editing, are only partially deserved at best. To be sure, the “hillbilly” aspect of the story could have been better developed, the intercutting of the flashback and contemporary sequences could have been handled better, and the dialogue could have used retooling in some scenes. However, there are heartfelt sentiments aplenty here, not to mention the outstanding performances of Amy Adams and, especially, Glenn Close, award contenders in a number of competitions. Don’t buy into the bashing that’s been happening with this release; it’s patently undeserved.