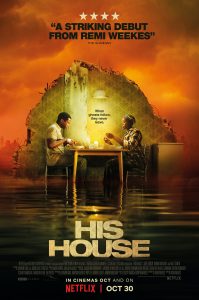 The true litmus test of a horror film is whether or not it’s scary, and this one fails miserably on that front. In addition to its lack of good scares, this debut feature from director Remi Weekes is often more muddle than riddle, taking seemingly forever to establish the nature of the story and then taking even longer to explain the reasoning behind it. And, through it all, the film is loaded with an array of allegedly frightening (and often-disconnected) moments that shed little light on what’s transpiring but that have apparently been left in primarily for their visual impact (which isn’t all that great, either). Admittedly, the picture manages to garner some worthwhile attention as it nears its conclusion, but, by that point, it’s unlikely viewers are going to care much. Also, the film attempts to work in some allegorical sociopolitical commentary, which, if handled better, might have made this a much better picture. Unfortunately, there’s not enough of what the film does well and far too little of what it needs to do better, leaving audiences with a plodding, dull, disappointing effort unworthy of the three BAFTA Award nominations it received (and that truly should have gone to more deserving offerings).