Skip to content
Home/‘Holes in the Sky: The Sean Miller Story”

‘Holes in the Sky: The Sean Miller Story” 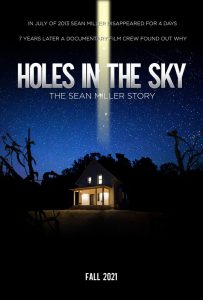 “Holes in the Sky: The Sean Miller Story”

The problem with the “found footage” or “recovered footage” genre is that it can only really be done once to be convincing, and “The Blair Witch Project” took care of that in 1999. Any subsequent attempts at trying to create that kind of “ambiguous mystique” simply fall flat, because viewers can spot them coming a mile away. Only when filmmakers try to do something different with this motif (such as an obvious spoof on it) can they succeed. That’s advice writer-director Ash Hamilton should have followed in his debut feature, which would have been more aptly titled “Holes in the Plot.” This ridiculous but oh-so-serious attempt to do for alien abductions what “TBWP” did for nasty old ladies living in the woods fails on virtually every front, making its $4,000 estimated budget seem bloated given the finished product. From an overlong story line to unexplained, underdeveloped, unresolved story threads to the inclusion of excessive extraneous material to a lack of genuine frights to laughably bad acting, this film has virtually nothing going for it. What’s more, the film’s vague conclusion is obviously being dangled as a carrot to set up a sequel, but, after having sat through the painful 1:54 runtime of this mess of a “documentary,” I can’t imagine anyone begging for more. This release came painfully close to earning another of my rare “0” scores, but I gave it a “1” because it provided plenty of fodder for cracking jokes about during my ill-advised screening. By the time it got to the end, I, too, was waiting for Scotty to beam me up.