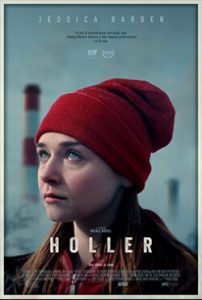 Making a film with familiar subject matter and circumstances only works when the narrative includes characters who credibly fit the scenario. Unfortunately, that’s the downfall of writer-director Nicole Riegel’s meandering debut feature about an intelligent but rough-hewn high school senior who takes up rogue scrap metal pilfering as a means to earn money to attend college and thereby extract herself from the small Ohio Rustbelt town where she grew up (and would not have much of a future). Despite a seemingly plausible story line, many of the specific events that it incorporates are a stretch, often going underdeveloped or wholly unresolved. That’s especially true of incidents involving the spitfire protagonist, most of which seem to mistakenly rely on her gritty-edged personality as the rationale for their inclusion, regardless of whether or not they’re believable or effectively brought to conclusion. The casting is somewhat questionable, too, particularly the selection of a 28-year-old actress to play an 18-year-old character, a flawed choice that not even makeup and costuming can effectively conceal. While the film does feature some superb cinematography and a realistic production design, those attributes are hard-pressed to make up for the other shortcomings. Perhaps much of this can be chalked up to this being the filmmaker’s first full-length outing (let’s hope so).