Skip to content
Home/‘Honk for Jesus. Save Your Soul.’

‘Honk for Jesus. Save Your Soul.’ 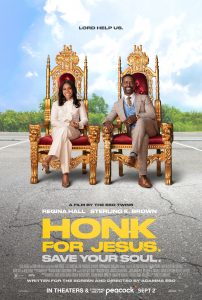 “Honk for Jesus. Save Your Soul.”

Nobody likes hypocrites – unless, of course, they make good fodder for laughs, as is the case in this sidesplitting new comedy from writer-director Adamma Ebo. The target here is the hypocrisy often present in the bluster-filled fundamentalist megachurches, whose elaborate Sunday services play like big-budget Broadway productions and for which their pastors ask their congregations to fork over wads of cash – all in exchange for allegedly saved souls and their leaders’ ability to live lives of grossly ostentatious affluence. Invariably, though, these schemes come with a catch in which their two-faced preachers get caught in career-ruining scandals that expose just how hypocritical and corrupt they really are. Such is what happens in this mockumentary-style offering about a once-big time Atlanta pastor and his “first lady” as they attempt to rebound from a fall from grace that rings all too familiar in the evangelist community. Filmmaker Ebo’s debut feature pulls no punches in the picture’s critically biting humor and in its periodic forays into dramatic material, moves meant to draw attention to the innate insincerity of its protagonists (and some of its parishioners). In doing so, the film straddles a fine line between comedy and drama, presenting a carefully concocted mix that works much of the time but occasionally becomes a little too heavy-handed for its own good. Nevertheless, “Honk For Jesus. Save Your Soul.” makes an impact with its fine performances by Sterling K. Brown and Regina Hall, as well as its wickedly delicious wit and ample sight gags, elements that will have viewers delightfully giggling with glee. This one might not have you on your knees, but you might easily fall over laughing.