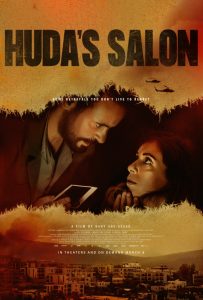 For the residents of the Occupied Palestinian Territory, everyday life is often difficult enough by itself. But, for the women of this repressed society, it can be doubly challenging due to the intimidation and scrutiny inflicted by both government authorities and an often-archaic patriarchal culture, conditions that frequently paint them into uncomfortable corners and leave them with nothing but poor choices. When the Israeli secret police blackmail a middle-aged beauty salon owner into getting her to work for them when she’s caught cheating on her despicable husband, she reluctantly agrees to cooperate. She’s tasked with recruiting young women to act as informants by drugging them and photographing them in staged compromising positions. With such “evidence” hanging over them, the recruits are coerced into supplying information about the Palestinian resistance in exchange for government silence and paltry tokens of appreciation. But, when the resistance gets wind of what’s going on, the salon owner and her recruits are now squarely placed between being exposed as either “cheating spouses” or traitors to their society – and always by men, regardless of which side they’re on. Director Hany Abu-Assad’s fact-based, taut sociopolitical thriller thus showcases the twin dilemmas faced by Palestinian women living in a state of siege both from the state and in terms of gender. Told through twin story threads involving the salon owner and one of her recruits (brilliantly portrayed by Manal Awad and Maisa Abd Elhadi, respectively), the film explores its central issues with an edge-of-your-seat quality, moving along at a brisk pace and effectively creating a palpable degree of tension as the narrative plays out. There are times when the dialogue in one of the threads becomes a little heavy-handed and clichéd, but, beyond that, there’s little to detract from the picture’s well-conceived and thoughtful story and script. The film even throws in a touch of deliberate ambiguity to illustrate the lack of faith that women frequently experience in a system that makes a lot of promises that can’t be fully trusted. Most of all, though, this offering effectively shows that the circumstances in this situation are impacted by influences that go beyond simple, black-and-white politics, carrying ramifications far wider and deeper than what most of us know about.