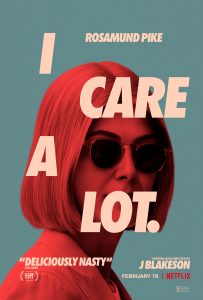 Seeing the ugly truth exposed in all its vile splendor may be hurtful and shocking, but sometimes it’s a necessary wake-up call for the betterment of our collective well-being, as this cynical, darkly satirical comedy and social commentary illustrates on the nature of predatory capitalism. When the owner of a shifty legal guardianship agency adept at fleecing wealthy seniors afflicted with mental health issues meets her match in an equally crafty nemesis with nefarious connections, a war of wits breaks out for domination and control of the situation, regardless of who might get hurt in the process. While the film starts to go off the rails somewhat in the second half, its wicked humor makes clear the ruthlessness inherent in the practices of this economic system, both on a personal and a global geopolitical scale. What makes the film, though, are its superb performances, especially those of Rosamund Pike, Dianne Wiest and Peter Dinklage. Some may find the content and message of this offering troubling, but that’s simply the movie doing its job. It stresses the need for us to shed our Pollyanna attitudes, no matter how disillusioning that might be. Indeed, it reminds us of the old adage that it’s easier to fool people than to convince them that they’ve been fooled.