‘In from the Side’ 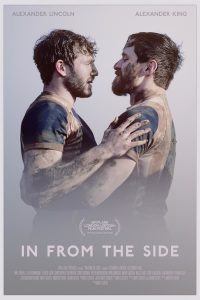 “In from the Side”

In-depth narrative features about lesser-known segments of the LGBTQ+ community don’t exactly come along every day, so it’s indeed heartening when one about life in one of them – specifically the gay male rugby kinship – makes an appearance in the movie market (even if primarily only at film festivals). What’s less satisfying, however, is when such a release doesn’t quite live up to its potential, as is the case with writer-director Matt Carter’s second offering. In following the clandestine love affair of two London ruggers who attempt to conceal their secret romance from their partners and teammates, the film explores its share of ethical matters, as well as the hard choices involved in making decisions about when it’s time to hold on to or to let go of existing relationships (especially when they appear to have run their course). However, in telling this story, the film drones on far too long and seriously needs to dial back some of its melodramatic soap opera tropes. It also could stand to lose some of its heavy-handed judgmentalism about open gay male relationships, arrangements that are fairly common (and, in many cases, reasonably healthy) in the LGBTQ+ community. To its credit, though, this production features an array of fine performances (particularly among its cast of colorful supporting characters), as well as excellent cinematography of the rough-and-tumble rugby matches. Sensitive viewers, though, should beware of some sexually explicit content in deciding whether to screen this offering. But then, given the picture’s unfortunate shortcomings, viewers in general might want to consider that decision carefully as well. In my view, I’d wait until it becomes available for streaming – and an occasion when you’ve got time to spare.