‘In the Same Breath’ 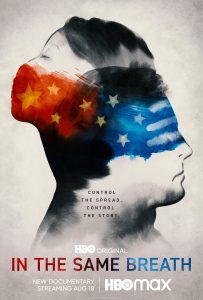 “In the Same Breath”

Making a documentary about the COVID-19 pandemic has got to be one of the most challenging ventures a filmmaker can undertake, especially given the fact that it’s still ongoing. What’s more, there are so many aspects to focus on that it’s undoubtedly difficult to know where to place proper emphasis. And, when one adds to that the ever-shifting sands of available and credible information (particularly from officials in China, site of the pandemic’s origin, and the US), it’s difficult to know what to believe. Such are the hurdles that director Nanfu Wang faced in making this film, now airing on HBO. Certain elements are sensitively and expertly handled, such as the impact of the pandemic on victims, their families and the health care workers tending to their needs, painfully sad segments guaranteed to move viewers to tears. However, the slope is considerably slipperier when it comes to addressing governmental responses to the virus. Is the ineffectual handling of the crisis due to incompetence, a lack of preparation and/or blind denial, or is something more nefarious at work, given the hardline, authoritarian, propagandist proclamations that, arguably, are being issued on both sides of the globe? On this front, the director seems less sure of herself, hedging her bets and seemingly holding back from saying what she really wants to say. That’s unfortunate given that Ms. Wang is generally not one to waffle, as previously seen in hard-hitting releases like “One Child Nation.” Here, however, she seems to resist throwing down the gauntlet, an approach that dilutes her message – and weakens the film – at a time when a definitive perspective is needed more than ever.