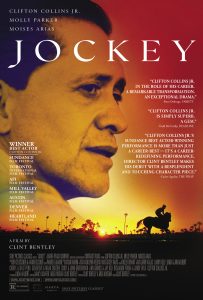 One of the worst sins a film can commit is to provide its viewers with a seemingly engaging premise and then completely drop the ball. Such is the case with writer-director Clint Bentley’s debut feature about an aging jockey with a potentially intriguing back story, relationships and character attributes whose seeds are planted but never sprout. That shortcoming is compounded by the film’s failure to sufficiently exploit the visual appeal of its subject matter – horse racing – which should innately lend itself to a wealth of exciting sports footage. What’s more, the supposedly stirring breakthrough performance of longtime character actor Clifton Collins Jr. is a major letdown in which he comes across virtually the same as he has in many of his prior portrayals. This combination thus regrettably results in an array of long-winded, boring, talky exchanges that are about as tasty as a bowl of cold porridge. Regrettably, this is yet another in a long string of overhyped 2021 releases that just doesn’t rise to the level of its promise. Put this one down and out of its misery.