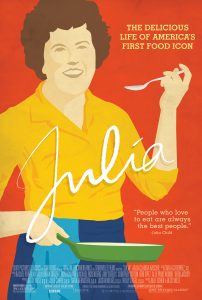 Who would have thought that a middle-aged woman with a lilting voice and an eccentric manner would become a pop culture icon? But that’s precisely what happened with chef Julia Child, who brought the joy of cooking and eating into the mainstream at a time when most Americans gave it precious little thought. Through the publication of her seminal cook book Mastering the Art of French Cooking and her myriad television appearances, she brought a new appreciation for the art of the kitchen into the lives of many, serving as meticulous instructor, courageous mentor and eclectic culinary tour guide. In the process, she also single-handedly gave birth to the television cooking show and lent ample credibility to the value of the struggling public television network. And, through it all, the public was treated to the antics of a truly American original, one whose animated and quirky presentation style was as delicious as what she was preparing in her kitchen. What’s more, audiences are introduced to Julia the individual, the secretary who worked for the OSS in Asia during World War II, the romantic who fell madly in love with her husband, the activist who was an ardent voice for the pro choice movement and AIDS victims, and the generous supporter of aspiring chefs. Directors Julie Cohen and Betsy West serve up a sumptuous buffet of archive footage, recent interviews with friends and colleagues, and gorgeously filmed food that will send viewers on a beeline to the nearest gourmet restaurant upon leaving the theater. Fans of Julia and the art of cooking owe it to themselves to see this lovingly assembled tribute to an icon who accomplished and contributed so much and made it look easy – and fun.