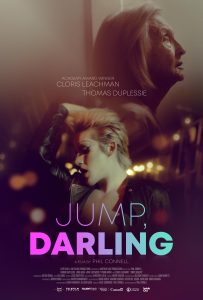 When an aspiring actor who has trouble landing roles starts settling into a new routine as a drag queen, the decision does not set well with his button-down control freak boyfriend, prompting him to leave life in Toronto behind and take off for a visit to his aging and increasingly feeble grandmother in rural Ontario. Getting some distance thus provides him with an opportunity to shuffle his priorities and to draw from the no-nonsense wisdom of “grams.” It also enables him to explore new artistic options and love interests, as well as to confront longstanding issues with his loving but overbearing mother. Director Phil Connell’s debut feature may meander a bit at times, but its heartfelt sentiments and sage advice about being willing to take a leap of faith, no matter what the endeavor, will resonate with viewers who have taken – or who need to take – steps aimed at pushing the reset button in their lives. The film is particularly noteworthy as the final screen performance of Cloris Leachman, who is positively superb in the role of the insightful matriarch, capping off a storied career in an auspiciously fitting way, a portrayal sure to tug at the heart strings without being manipulative in doing so. This delightful offering holds universal appeal for anyone who has ever had to go through a difficult transition in search of a way to come out looking like a queen.