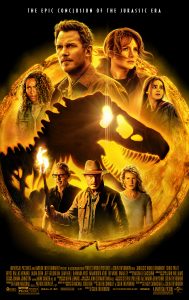 In the interest of full disclosure, I’ll admit up front that I wasn’t expecting much from this sixth installment in this storied, nearly 30-year-old franchise. And I’ll also admit that I wasn’t exactly bowled over by the result. However, I also wasn’t effusively disappointed by it, either, much to my surprise. While director Colin Trevorrow’s second offering in the franchise’s current trilogy admittedly goes on too long and has its moments of needless convolution, tedious pacing, monodimensional character development and tenuously strung-together plot threads (especially in the opening act), it’s nevertheless a vast improvement over his laughable first effort in this series, “Jurassic World” (2015). In this outing, which features both returning “World” characters (played by Chris Pratt, Bryce Dallas Howard, BD Wong and Isabella Sermon) and the reunion of the original trilogy’s protagonists (Sam Neill, Laura Dern and Jeff Goldblum), the film has found a better footing for mixing its action-adventure elements and decidedly campy moments. In addition, it effectively (though sometimes heavy-handedly) presents its points about the potential dangers of genetic engineering, the less-than-subtle need for all of us (both humans and nature) to get along, and the perils of unbridled corporate greed (disingenuous though that argument may be coming from its well-heeled producers/distributors). But, given what most viewers are here to see – the thrills and spills of grand adventure and superbly executed special effects – the picture handily delivers the goods throughout, even if some of them should have been pruned back somewhat. In all, this is a moderately satisfying summertime popcorn movie, one that truly doesn’t deserve to have been unceremoniously dumped upon to the degree it’s been denigrated (though don’t expect groundbreaking cinema, either). And, as for all that talk about this being the finale in the franchise, I don’t buy it for a minute (just as I didn’t buy “The Rise of Skywalker” (2019) as being the last installment in the “Star Wars” franchise), so you can ignore those comments about this offering being a lame ending to the “Jurassic Park” mythology; it will almost assuredly be back when there’s as much box office at stake as there is with this property. It may take some time to retool and come up with a new angle to breathe new life into it, but extinction is not an option. Just ask the bean counters.