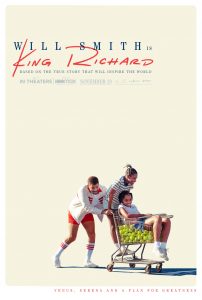 I’m really at a loss to understand the widespread fuss being made about this dull, overlong biopic about the self-promoting patriarch of the Williams family tennis dynasty. Director Reinaldo Marcus Green’s latest explores the unconventional, often-questionable lengths that its protagonist went to in developing the astoundingly successful careers of his gifted daughters Venus and Serena. But that, in itself, illustrates the inherent problem with this film – why is it focused on the management and not the talent? King Richard’s story, if truth be told, just isn’t that interesting. The drama is far from compelling, frequently settling into a narrative that becomes circular and thematically redundant. More importantly, though, the real stars of this story are relegated to second billing, essentially watering down the most engaging element it has to offer. To the picture’s credit, it features yet another fine lead performance by Will Smith (though far from the award caliber it’s being touted for), and there are some modest moments of heartfelt inspiration. But, unless you’re a diehard tennis buff or enjoy the back stories of sports legends, you might easily become bored by this one, especially with a two-and-a-half-hour runtime that misses the mark of what the picture truly should be all about.