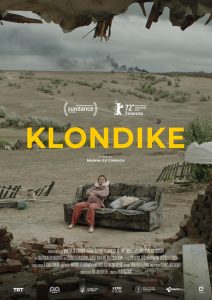 Standing one’s ground in the face of extreme adversity – especially in dealings in which one has no vested stake in the outcome – can prove to be exceedingly frustrating and difficult. So it is for a farming couple on the verge of becoming first-time parents in rural eastern Ukraine near the Russian border in 2014. They merely want to live out their lives in peace and quiet. Unfortunately, circumstances won’t allow that in this heart-wrenching story as the divisive separatist conflict heats up and authorities search for culprits in the erroneous nearby downing of Malaysia Airlines Flight MH17, a missile strike that killed everyone on board. In the midst of all this, life for the unwitting bystanders grows ever more complicated as they struggle with these conditions, causing strain not only in their community, but also in their relationship at a time that should be one of great joy with their newborn’s impending arrival. Writer-director Maryna Er Gorbach paints a powerful but grim picture of life in this troubled region (the relevance of which is undeniably even greater these days), frequently depicting the atrocities and hardships with long, slow panning shots that make viewers feel like cold, detached but nonetheless affected observers of what’s playing out before them. Though the pacing is occasionally slow and the narrative somewhat episodic, the film is consistently mesmerizing, a quality that helped earn it the 2022 Sundance Film Festival Award for best director in the world cinema – dramatic competition, along with a nomination for the event’s grand jury prize in the same category. While “Klondike” may be a heartbreaker, it nevertheless delivers a powerful message that we should all heed for a troubled people beset by tragedies that they neither wanted nor deserved – and that, regrettably, have carried on to this day.