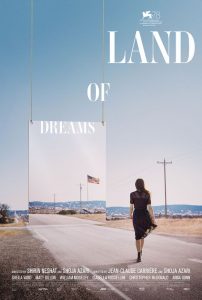 Screened at the Tribeca Film Festival (3/5)

The line between dreams and reality can sometimes get blurred. And, unfortunately, that’s a problem that plagues this offering from directors Shoja Azari and Shirin Neshat, based on one of the last scripts written by the late legendary screenwriter Jean-Claude Carrière. In this sometimes-real, sometimes-surreal tale set in the near future, the Census Bureau has become one of the most important and powerful agencies of the US government. Besides collecting demographic information, it has begun amassing details about citizens’ dreams for “protective” purposes. This imposing and intrusive surveillance initiative is seen through the eyes of a “dream catcher” of Iranian descent who appears to be having trouble distinguishing the real world from the dream world. It brings her into contact with an array of interview subjects who have a wide range of dream experiences, as well as varying degrees of willingness to share their sleeptime stories. The experience also raises a variety of personal, cultural, sociological and spiritual issues for the Census agent and those with whom she meets. And that’s where this film gets itself into trouble as it attempts to cover far too much ground thematically, narratively and cinematically. It feels as if the filmmakers are constantly reaching and never quite annunciating exactly what it is they’re trying to say. That’s regrettable, given the pool of talent in the cast, including Matt Dillon, Isabella Rossellini, Christopher McDonald and Anna Gunn, as well as the deftly understated approach used in telling the story. However, the film’s subtlety is so subdued that, when combined with the ill-defined smorgasbord of topics the picture is attempting to address, the intents of its creators frequently become muddled, if not lost. In its current state, this release needs some serious retooling to provide greater clarity and to better define its messages. There are ideas worth being said here; they just need to be expressed more cogently.