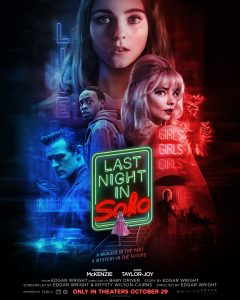 Though stylish to a fault, this paranormal crime drama about a present-day London fashion design student who has ghostly visions of the alleged murder of an aspiring 1960s nightclub singer who’s crassly pimped out by her manager unfortunately can’t make up its mind if it wants to be a De Palma-esque thriller or a campy romp. Granted, it does both well, but, regrettably, it fails to mesh them successfully. The film also has a tendency to become repetitive, cinematically going over the same ground time and again, teasing viewers about a twist that’s obviously coming but is perpetually delayed. Director Edgar Wright’s latest could thus benefit from some judicious editing, as well as a tighter focus in terms of what it’s actually trying to be. Thankfully, this offering is blessed by the fine performances of Anya Taylor-Joy, Matt Smith, and, especially, Diana Rigg in her final screen appearance, though Thomasin McKenzie’s lead portrayal becomes cloyingly whiny and annoying over time. “Last Night in Soho” is by no means an awful picture, but it’s too bad that its substance doesn’t match its style.