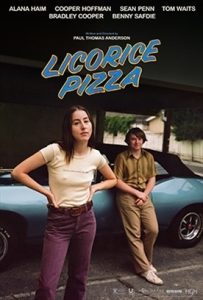 I came away from director Paul Thomas Anderson’s latest heaving a big “So what?” This alleged coming of age romantic comedy set in the 1970s fails on virtually every front. I never laughed once during this tedious, meandering overlong saga, primarily because none of the supposedly funny bits landed successfully enough to bring out the chuckles. As for the romance, I didn’t buy it for a minute, both in terms of its believability and the utter lack of chemistry between the overhyped leads. What’s more, the narrative is merely a string of nostalgic anecdotes (many of which stretch credibility) that bear little relation to one another and often seem to come out of left field, shining a bright light on how poorly written this offering’s screenplay truly is. How this cinematic mess has captured all of the accolades that it has thus far is really beyond me. And, at more than two hours in length, this release is a genuine waste of one’s time. That was surely true for me when I found myself checking my watch after only 25 minutes into it. I can’t say I know how PTA has lost his way as a filmmaker, but that’s very much been the case with his last four productions, which have progressively gone from bad to worse. As for this picture in particular, all I can say is that, having lived through the ’70s myself, they were definitely a lot more fun than this film is.