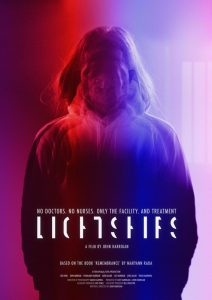 Handily one of the best offerings from this year’s festival, “Lightships” is one of the most captivating and unusual releases I have seen in quite some time. Director John Harrigan’s film about a woman who wakes up in a mysterious, unattended mental health facility follows her journey to learn how she ended up there and what may have prompted her institutionalization. In the process of working through the mystery, however, she discovers more than she likely bargained for, including insights into the nature of existence, her true self, the essence of death and dreams, humanity’s interaction with extraterrestrials, and a wealth of metaphysical concepts that shed new light on what constitutes reality and where we as a species are headed. Based on the book Remembrance by Maryann Rada, the film shows more than it tells, images that depict its material metaphorically, some of which are intrinsically poetic and others of which are excessively abstract and cryptic. There are also some sequences that could have used some judicious editing given their length and sometimes-frustrating character. On balance, however, this ambitious work is to be commended for its audacious experimentation and its willingness to take chances in addressing an array of esoteric notions in insightful, resonant and readily comprehensible ways, something more films and filmmakers should be courageous to try.