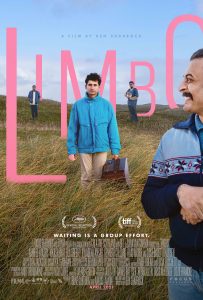 Just because a movie character is stuck in limbo doesn’t mean viewers should be subjected to the same. Such is the case with this sometimes-humorous drama (blatantly misrepresented in its trailer as a fish-out-of-water comedy) about an asylum-seeking Syrian musician stuck on a remote island off the Scottish coast while awaiting word about his claim. The plodding story, with its exceedingly long, lingering barren landscape shots, all-too-obvious symbolic elements, and quirky attempts at humor that seem stuck on as after-thoughts, examines the refugee crisis from a variety of angles but never really comes up with a cohesive and directed narrative, falling somewhere vaguely between character study and dramatic feature. To be sure, the dramatic elements aren’t entirely without merit, but the script delivering them certainly could have used some shoring up to yield a better outcome. Consequently, what audiences are left with in director Ben Sharrock’s second feature is a patience-trying offering seeking to find itself almost as much as its lost protagonist is looking to find himself.