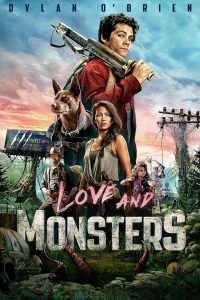 It’s always a real treat when a film from which one might not expect much turns out to be a pleasant surprise, and so it is with this charming, fun, entertaining sci-fi/teen romance/comedy/road trip tale set against the challenges of a crushing but comical monsterpocalypse. When a global catastrophe causes animals, insects and other forms of wildlife to mutate into monsters, surviving humans are forced into underground bunkers to stay alive. But that becomes tiresome after a while, as a bored, geeky, lonesome twenty-something discovers when separated from his girlfriend for years, prompting him to take a chance and go in search of her, despite the perils. What ensues is an evolutionary saga that’s reflected in more than just the creatures of nature. Though occasionally somewhat predictable, the film is nevertheless filled with many delightful plot twists and developments that are augmented by colorful supporting characters (some of them human, some not), genuinely laugh-out-loud humor and even a few touching moments that are truly heartfelt but without ever becoming sappy. Then there are the picture’s superb visual effects, which very deservedly earned an Oscar nomination for their clever, inventive, eye-popping designs. While “Love and Monsters” may not have a particularly compelling title, it has much to offer in terms entertainment value and engaging insights, even for younger viewers, qualities that are often hard to come by in fare aimed at such audiences. And, even though this one has been quietly flying below the radar for a while, director Michael Matthews’ second feature outing deserves wider attention than it has been getting in light of everything it has going for it.