Skip to content
Home/‘Lunana: A Yak in the Classroom”

‘Lunana: A Yak in the Classroom” 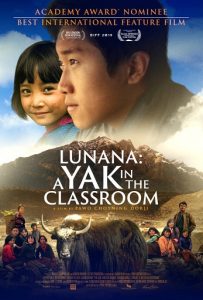 “Lunana: A Yak in the Classroom”

It’s always gratifying to find a little-known film that delights beyond expectations, as is the case with this Oscar-nominated offering from Bhutan. In this story of a teacher who’s unhappily locked into a government contract (and who would rather relocate to Australia to pursue a singing career), the film follows his evolutionary odyssey when his unsatisfactory performance earns him a reassignment to the remote village of Lunana, a highland native community that doesn’t even have electricity. It’s a prospect he loathes – that is, until he sees joys and insights coming out of the experience that open his eyes to possibilities that he hadn’t previously considered for his life and his art. Heartfelt sentiments, gorgeous cinematography, unexpected satisfaction and skillfully nuanced performances abound, despite occasional tendencies toward obvious but forgivable predictability. Director Powa Choyning Dorji’s debut feature showcases the work of a promising new talent who appears poised to deliver elegant, beautiful and revitalizing work from the rooftop of the world. Looking forward to what comes next.