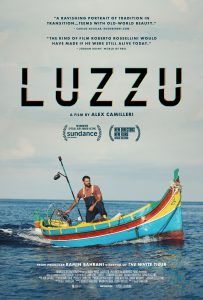 While the narrative of this engaging Maltese offering may seem somewhat familiar (at least superficially), there are plot developments that defy formula and take the film in unexpected directions. Add to that the picture’s fresh locale and little-known subject matter, and you’ve got a truly intriguing release. But what’s perhaps most impressive about this debut feature from director Alex Camilleri, a nominee for the Independent Spirit Awards’ Someone to Watch Award, is the strength of the performances he’s managed to evoke from a cast consisting of many nonprofessional actors, including protagonist Jesmark Scicluna, winner of the 2021 Sundance Film Festival Special Jury Award for Acting in the Dramatic World Cinema competition. In dealing with powerful universal themes like tradition vs. progress, weighing the expediency of need fulfillment against the preservation of moral values, and knowing when to hold on or let go, all as seen through the lens of the Maltese fishing industry and the struggles of a young married couple trying to manage the challenges of being new parents, the film paints a captivating picture on a variety of fronts, one that never becomes muddled and succeeds at wrapping up all of its story threads by movie’s end. “Luzzu,” the Maltese term for a traditional, brightly colored, wooden fishing boat, has thus far largely flown below the radar, playing primarily at film festivals and in limited theatrical release. However, as one of the better films in an otherwise-disappointing year at the movies, this is definitely worth your time now that it’s available for streaming. Indeed, this is one fish story you won’t want to miss.