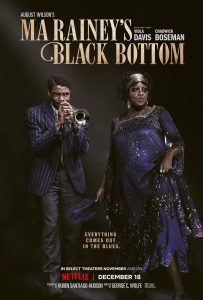 When all the makings of a great film are in place, one expects to see an outstanding picture. Unfortunately, that’s not the case with “Ma Rainey’s Black Bottom.” While most of its ingredients are indeed noteworthy – superb production values, stellar writing, and the positively exceptional performances by Chadwick Boseman (his final role), Viola Davis and Glynn Turman – the components just don’t mesh into a cohesive whole. Instead, viewers get an overly stagey production that consists of a series of insightful and eloquent soliloquies interspersed among occasional (though one might easily say far too few) musical numbers and meticulously orchestrated comic relief moments. Regrettably, the finished product feels more like parts of a story that got haphazardly glued together rather than a harmoniously blended composite, essentially a day in the life of the Mother of the Blues and the various individuals she interacted with on that day but not offering much depth about the relevance, meaning or legacy of those involvements. Consequently, despite the film’s strengths, viewers are likely to come away from this offering wanting more than they get, and that’s unfortunate, both for audiences and for Ma Rainey, both of whom definitely deserve better.