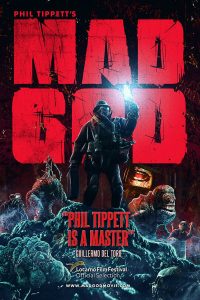 Ah, vanity. How lucky one is to have attained such notoriety for one’s work that one can then devote all one’s energies to a pet project that’s not necessarily meant to make money or win critical praise but to merely satisfy one’s own creative urges – especially those that are so far removed from the rigors of conventionality that one couldn’t care less. That could be one way of summing up the essence of this stop-motion animation offering from director/special effects master Phil Tippett, best known for his work on films like “Jurassic Park,” “The Empire Strikes Back,” “Starship Troopers,” “Indiana Jones and the Temple of Doom” and the original “RoboCop” series. This wildly imaginative, superbly produced, sometimes-funny, supremely decadent dark fantasy easily boasts some of the best and most elaborate stop-motion animation sequences ever created, even if they are also some of the most gratuitously and grotesquely disturbing ones ever made. While the imagery may be a feast for the eyes (though I wouldn’t recommend eating a meal while screening it), the nonlinear nature of the narrative grows progressively more tiresome the further one gets into it. Consequently, my rating here is indeed a generous one, primarily in recognition of the picture’s tremendous technical accomplishments, which were 30+ years in the making. However, although this work may succeed as a cinematic art piece with more than a few allusions to “God as mad scientist,” there’s little else to recommend in terms of what it has to offer as a motion (or, in this case, stop-motion) picture. But, then, when satisfying one’s own vanity is the main objective, as on a project like this, I suppose that’s all that really matters in the end, even if no one else shares in that vision – or enjoyment.