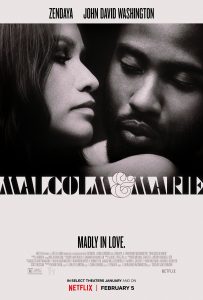 Watching this truly abysmal relationship drama is akin to witnessing a horrific traffic accident play out over the course of nearly two hours. As a self-important, self-indulgent, self-aggrandizing vehicle for writer-director Sam Levinson, this 15-round knock-down, drag-out lover’s quarrel with no referee grows tedious and exhausting quickly as the film’s two protagonists spew buckets of bile at one another through myriad monologues delivered with flawless articulation and an artificial eloquence that defy believability. Though stylishly filmed in black and white with earnest performances by Zendaya and John David Washington and a fine (though occasionally all-too-obvious) soundtrack, the picture nevertheless rings inauthentic virtually from the outset with a narrative that becomes circular and characters who grow ever more reprehensible as the picture wears on. One can’t help but wonder, “Why are these two people together?” And, as their bombastic and whiny arguing drones on and on, it probably wouldn’t take much for the average moviegoer to yell “Shut the hell up!” at the screen. Without a doubt one of the most frustrating, annoying, tiresome and pretentious offerings I’ve seen in a long time.